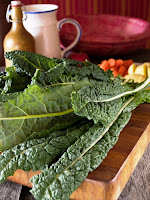 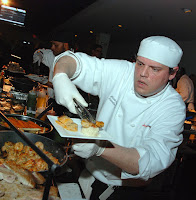 A Legendary Event’s Executive Chef Lincoln Stevens served his innovative presentation style “Kaleidoscope Menu” last week at The Savannah College of Art and Design’s Scholarship Gala. This annual event featured student demonstrations, performance art, and a silent auction of student and professor artwork. The crowd of 575 guests were awed by a performance art piece that one observer described as a “post-apocalyptic Amelia Earhart” dance. The gallery hummed with excitement as the goggle-clad dancers moved with ballet precision to bass laden ambient music. The post-modernistic dancers writhed and perched upon various rungs of ascending and descending wooden ladders that gathered centrally at the room’s core. In addition to the genre-breaking performance art piece, the original paintings and photographs that hung around the room’s perimeter were another testament to the eclectic range of the school’s enormous talent. Guests also had the opportunity to place their bids on distinctively crafted jewelry and sculpture pieces.

Following the presentation, guests followed the thread of creativity through to Chef Stevens’s experimental menu. After surveying the array of “Hues of Protein,” “Starch Notes,” “Vegetable Tones,” and “Glazes” that lay before them—the guests “built” their own menu. Chefs at each “window” worked directly with the guests to help them create an ideal menu that suited the nuances of his or her palate. Many of the guests relied predominantly on the guidance and suggestions of our veteran chefs. Others, with a taste for experimentation, got down right creative. Guests seemed drawn into the experimental spirit of the Kaleidoscope Menu. An experimental culinary affair was perhaps the only way to underscore SCAD’s innovative spirit. Chef Stevens remarked, “this [The Kaleidoscope Menu] is the perfect menu for this event because it’s the perfect merging of colors and flavors.”