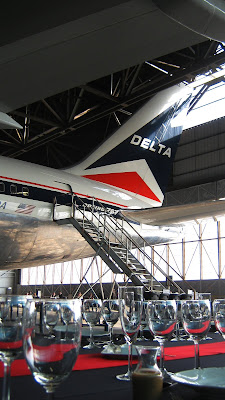 On Tuesday March 16th, most of the team here at A Legendary Event helped with a very important event at the Delta Heritage Museum. The Delta Business Elite flight attendants were in town for a meeting and we were asked to do a seated luncheon event for 225 guests in the Delta Air Lines historical hangar. The seated luncheon for 225 guests (which ended up really being for 256 guests) was focused around customer service; therefore, we had 1 service staff per 2.5 guests. This helped us provide outstanding service from the second our guests were seated to the very end of the dessert!! 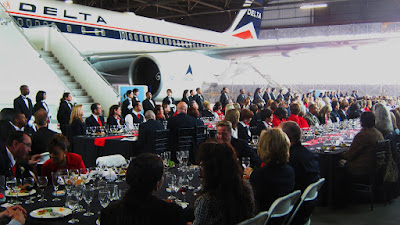 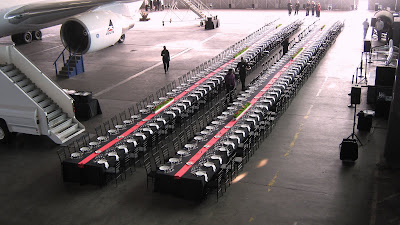 The guest dined under the “Spirit of Delta” which is a Boeing 767 that retired to the historical hangar on May 7, 2006. The Delta Air Lines staff is very familiar with this aircraft as it signifies the first Boeing 767 bought by Delta employees for $30 Million. The aircraft represents the gratitude employees had for Delta, after none of the employees were laid off when the company was experiencing financial troubles in 1982. Employees raised the money through payroll deductions, and on Dec. 15, 1982, gathered in Delta’s Technical Operations Center in Atlanta to present the aircraft to the airline. What an honor it was for all of these employees to dine under such a significant and important symbol of their company!! 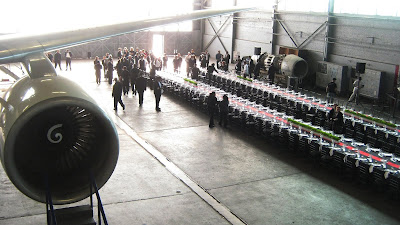 There were two looooong banquet tables which collectively seated 225 guests. Three small tables had to be frantically added when 26 more guests arrived then planned. The three course luncheon lasted about 1.5 hours and consisted of a cylindrical stacked salad, a trio of burgers, and a raspberry chocolate dome for dessert. Mmmmmmmmm!!! (Photo credit goes to the “Legendary” Wilward Hughes)